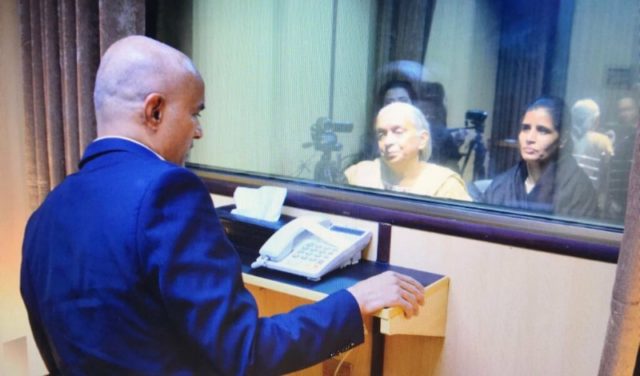 Kulbhushan Jadhav met with his wife and mother in Pakistan Jail

Kulbhushan Jadhav, a prisoner in Pakistan, met with his wife and mother in Islamabad on Monday. However, the method of this meeting is being questioned. The meeting is held on humanitarian grounds, Jadhav was not allowed to meet directly with his mother and wife. There was a glass wall between them and they talked through an intercom. The question is arising in this situation that why human sensibilities not considered in this meeting? this meetings Video recording is also being done by Jail Authority.

Meeting between Commander Kulbushan Jhadev & his family in progress pic.twitter.com/THG925V1fO

#KulbhushanJadhav‘s mother and his wife at Pakistan Foreign Affairs Ministry in Islamabad after their meeting with him ended. Deputy High Commissioner JP Singh also present. pic.twitter.com/kpWP7VVUzm

47-year-old Kulbhushan Jadhav was sentenced to death in April this year by Pakistan’s military court for alleged espionage and terrorism charges. In protest against this, India had approached the International Court of Justice, where Jadhav death sentence stayed by ICJ till final verdict. Pakistan has repeatedly rejected India’s request to extend diplomatic help to Jadhav.